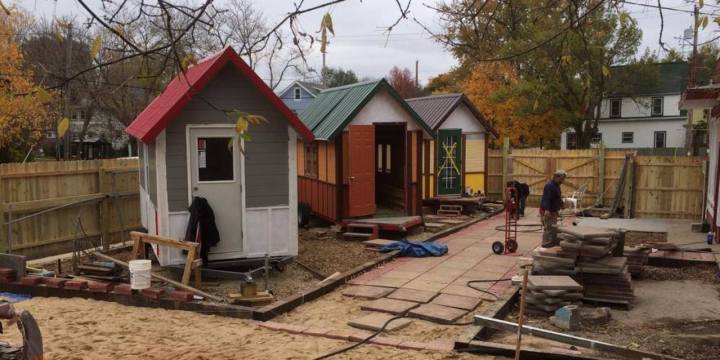 I’ve been going to physical therapy because I broke my leg in December. A few weeks ago we left PT and decided to go to John’s Burgers for lunch, and we saw a homeless man who was camped out across the street with a lawn chair, and he had a shopping cart towering above him. My partner decided that he was going to buy him 2 burgers, fries and a drink. So we left the drive-thru and drove across the street and he parked the car in the parking lot. He got out of the car to give him his food and I stayed in the car because I was still using crutches and the wheelchair.

He came back to the car and told me that the homeless man had all of the belongings that he was able to take with him when he became homeless. He also had several bags of cans and bottles for recycling. But what was most surprising is that he said to my partner “You mean to tell me that you saw me and you thought enough about me to buy me food?” He was practically in tears. We’ve fed many homeless people who seemed ungrateful for the food because they wanted money instead. It was refreshing to actually have someone feel surprised and say thank you.

In my previous blog post about homeless shelters, I said that I wish I had the money to build a shelter with those Japanese hotel containers that are stackable with twin beds in them. But, I’ve been watching several shows where people build tiny houses for themselves. They’re like trailers and RV’s, but they are the shape of an actual house with an upstairs loft for their bed. There’s also another upstairs loft on the opposite side for storage, or some people have built an upstairs loft for their entertainment with a couch and TV along with their video collection. I even saw one that was their kids bedroom.

There have been many articles about cities building tiny house communities specifically for homeless people, like the image above. They are about the size of a shed, but they are big enough for 1 person to live in. I mean think about it, if you were homeless, where would you feel most safe? Sleeping on a lawn chair on the sidewalk, or sleeping in one of these shed sized houses? At least in a tiny house you know your stuff is safe because it’s under lock and key, and I’m sure a tiny house community has a community bathroom similar to a trailer park bathroom with showers so they can stay clean.

I’ve had a fantasy that my book sold so many copies that I became rich, but instead of buying a huge mansion for myself like most rich people do, I would stay in the house we live in now, and spend that money on building a tiny house park specifically for homeless people with that trailer park bathroom. The park would have an actual address and each tiny house would have a number, sort of like an apartment number so they can fill out an application so they can get a job and get back on their feet. Once they have enough money saved up in the bank, they can get an apartment and they can get back to a normal life again.

My tiny houses wouldn’t just be a shed sized tiny house, it would have electricity powered by solar panels so they could keep their cell phones charged. You can get a free phone now with unlimited talk and text and 250mb of data per month. It’s probably a cheap flip phone, but it’s a phone that homeless people can use. My tiny houses would also have an actual bed in there so they don’t have to sleep on the floor, and a tv mounted on the wall with the very basic cable, and of course the park would have free Wi-fi for all. Oh and a small fridge and a microwave, and I would also build like a store with a food bank for them, and a laundry mat, and they would all get 3 meals per day. I was actually thinking that I could build a restaurant that they could work in and they could eat for free 3 times a day, and there would be actual paying customers who would donate money on top of their meals to help me so I don’t go from rich to rags and end in living there myself lol.

But… it’s all just a dream since I am not rich.

I was homeless and I lived in the Salvation Army homeless shelter for half a year when I was 17 years old. It wasn’t fun, but they gave me an address and phone number so that I could fill out applications to get a job. When their homeless shelter program ended in May, they helped me rent a room in someone’s house. That’s what I would like to do for the homeless people who cannot get in the shelter.

It’s really unfair to live in a world filled with empty houses and empty apartments, and you can’t live there because you got fired from your job and lost everything, or your parents kicked you out of their house because you were gay. It’s difficult for a homeless person to get a job when they don’t have an address and phone number, or they don’t have the means to take a shower and their clothes are filthy, or they don’t even own a pair of shoes. I’ve seen a homeless guy who didn’t even have any shoes, and I gave him my own shoes.

We live in a tough world, and someone has to make a difference. I can’t do it because I don’t have the money. I could do it if people bought my book. Heck, you don’t even have to buy my book

if you have a Kindle with Amazon Prime because it’s free to read for Prime and Kindle Unlimited users. Kindle’s are so cheap now, you can buy a 7″ Kindle Fire with 8GB

for only $49.99 and if you have Amazon Prime, you’ll get it fast with free 2 day shipping. So help me help the homeless, buy my book, or read it for free on a Kindle.