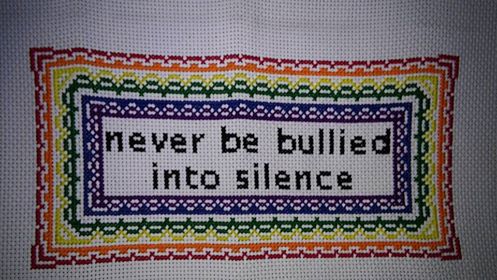 Well I said that I was going to make this, and I finally finished. I really wish I could give the person who created the pattern some credit because they deserve it for the work. I honestly wasn’t even sure if I would have the patience for this, but I did and it was actually fun. Some parts on the top are stretched in certain spots, but that’s fine, I’ll stretch the rest out to even it out, or maybe it will even out on its own.

It took me a couple weeks to make this because I was sick when I started this project. It took me a couple days to make the red, then another couple days to make the orange and so on. The green, blue and purple one day each. Actually I did the purple and the words on the same day. The reason I say it took 2 days for the first few colors is because I could only work on it for so long before the pain in my back came to stop me. This pattern is so detailed and the thing that took the most time was every time the embroidery floss knotted up as I was pulling it, and it was always in the back, but I always managed to remove them so I could continue. I didn’t have to use more than 1 skein of each color. In fact, I used less than a full skein for each color.

So some people may wonder why I would want to create something with the words “Never be bullied into silence.” Well, you see it’s personal to me. When I was a child, my mother knew I was being abused by my step father, she just didn’t want to admit it to herself. My little sister had bruises that the pre-school teacher saw. She was taken to the hospital and my mother was accused of abusing her, which in all honesty was false accusations. My little sister was so hyper that one day when I was sitting with her while she was playing on the stairs, cement stairs mind you, I was literally watching the bruises form. My parent’s were never abusive to her, but they were to me. When the guy from child protective services came to the house, my mother took me aside and threatened me. She told me so help me god if you say one word to these people, you will have the beating of a lifetime you will never forget. She knew I wasn’t going to accuse them of abusing my sister, she knew I would accuse them of beating me. So I was bullied into silence by my mother.

Another reason I would want to create this is because my sister does not like that I wrote my book. Her “friend” wrote a horrible review of “my book” (but it wasn’t a review of my book, it was an attack on me as a person by someone I’ve never even met). He said in his “review” that I am fooling my readers into thinking my lies are true when they are in fact lies and that I need to change the genre of my book from autobiography to fiction because it is full of lies. My response is it is not full of lies. This is my truth based on my memories of what happened in my life. I am allowed to tell me life stories, and if someone doesn’t like that, they can… and this is the part where I have to edit myself lol.

I wrote my book Diary of a Gay Nerd based on my memories of what happened to me during my childhood, when I was homeless at 15 and 17, and then homeless/sleeping on couches and living in motels until I was 23. And then of course my 3 bad relationships and my final relationship with the person I have spent the last 22 years with. These are my truthful life stories that I wanted to tell.

So I will never be bullied into silence, and that’s why I made this.

I said in my previous post that I was going to make this into a pillow, but my partner has convinced me to frame it instead. Since he wants me to frame it, and I still want it as a pillow, I’ve decided to compromise with him by making a second one lol. It was kind of fun to make and I want to make another one.

I saw this image on Facebook yesterday, and it was a powerful message for me, not just as a gay man who has been told many times by people to just stay in the closet because people like to keep thinking we don’t exist, but also as a child abuse survivor who was basically told I’m not allowed to tell my story.

My sister had some guy write a review of my book on Amazon, but it wasn’t just a review, it was an attack on me personally. He said that I am lying to my readers about an abuse that never occurred. How does he know? He wasn’t even there. But he told me in his review to change the genre of my book from autobiography to fiction because it’s all lies.

I will never be bullied into silence. I’m not going to remove my book from Amazon, which by the way you can read for free with Amazon Prime or Kindle Unlimited. I’m not going to change the genre of my book to fiction because it’s not fiction. Every story in my book is true, and I honestly don’t care if anyone doesn’t believe me because I know it’s true.

I asked the person who shared it if there was a pattern, but they shared it from another source, and honestly, how many sources has this been shared from? So I decided I’m not even going to bother finding the original source, I’m just going to copy it into my program Plastic Canvas Design Studio. It does stitches like / but it also does \ so I just used both stitches so I could get an X. And here it is. You may take the image and turn it into your own pillow, or if you would rather just make it and frame it, it’s your choice. But please don’t sell the image for profit.