One week ago I blogged that I had an addiction with Facebook and it was causing me some trouble. I said that I would limit myself to 1 hour a day on my regular Facebook, and I would change my Facebook on my phone to another account which is a role play character from EverQuest, which I did.

So how do I think I’ve handled myself in the last week? I think I’ve done pretty good. During my 1 hour a day on my regular Facebook I try to just read the news feed and not respond, although there were a couple I did respond to, but I stayed on topic and I didn’t try to joke around which would make people yell at me. Just yesterday someone asked if there was a place he could get his hair cut without having to hear religious greetings. My response apparently showed how old I am because I was laughed at, but you know what? I honestly don’t care.

I actually had more fun on my role play Facebook than I have had in a very long time. My character is a gnome wizard, and I would see people post things and I would respond as if I were speaking for my gnome in EverQuest, and it made people laugh, in a good way. They were laughing with me, not at me.

Speaking of EverQuest, I logged into the game and saw that no one in my guild was playing, but someone left a message of the day saying “email me”, and so I did, and it was someone I haven’t seen in EverQuest in ages. So it was nice to reconnect, even for a minute. Someone else who I am Facebook friends with said he still plays EverQuest and asked if I had any Misty Thicket Picnics, which is food for our characters, and naturally I had 129 stacks. Stacks have 20, so I literally have 2,580 Misty Thicket Picnics heh. I also have 22 stacks of Qeynos Afternoon Tea’s, which is 440. Not bad. Sometimes it’s good to be a hoarder since I can give people things they can actually use.

Other things I have done during my week. I’ve played The Sims FreePlay and I started to play a game called Hay Day. I’ve only been playing it for maybe 4 days and I’m already level 16.

I have also been reading more. I am currently reading a book called Pathfinder Tales: Liar’s Blade. There are a LOT of books in the Pathfinder Tales series, based on a tabletop RPG game similar to Dungeons & Dragons. I also bought the Pathfinder Beginner Box from Amazon and I should get it in a week or 2.  It was only $25 and it has a lot more than the D&D starter set had. I don’t have anyone to play with, but I plan on eventually getting a group together to play at the Bakersfield Gay & Lesbian Center. I don’t know how to play though. If I can find someone who has experience and can be the Dungeon Master then great, I can learn through them, if not then I’ll have to learn as much as I can so I can be the DM and we can all learn together.

I am doing my best to focus on other things, because there is so much more to life than Facebook. Remember a time before social media when people used to actually call each other, or they used to go to their friends houses and interact? Remember when we used our cell phones to actually make calls? Yeah, me neither.

Anyway, I am considering getting a gym membership. Planet Fitness has a special right now that expires on September 15th, that is no money down and $20 a month for a 12 month commitment and $39 a year fee. I don’t really have the money right now, so hopefully they will have another special again in the future because I really want to go to the gym. I need to exercise and get out of the house a little more. It’s a 21 minute bike ride from the house, but if their membership has unlimited guest passes, then both of us can benefit from my membership. I’d love to get in shape for the upcoming AIDS walk in October. The gym gives you unlimited use of their hydromassage and massage chairs and those are something I really could use because I am in agony every day. That would be a real big help.

Let’s see how things go from here. Until next time…

I feel like I’m in school all over again, but instead of actually sitting in a classroom, I’m sitting in my bedroom. I joke around that I’m home schooling myself. Well, technically I am.

The book that I am writing is a fantasy fiction novel based on my Gnome Wizard character in EverQuest. Although, it will not be based in that world, instead I will be creating a brand new world.

In order for me to write this with a solid foundation, I have to read 5 books in the “Write Great Fiction” series. I bought these ebooks on my Nook to help me learn to write fiction. But it’s not just reading books, I have to also create my characters. I mean, I could just say here is Joe Schmo and this is Tom Jones, but they are not regular people. The characters that I am creating are all fantastic creatures like gnomes, halflings, elves and centaurs etc. They all have specific talents that only certain races and certain classes can have. Each race and class can also only equip certain armor, weapons and spells and they have to cast the right spells on the mobs in the story. It has to be right, otherwise people will know and put the book down and say this is BS. You can’t put a Warrior in cloth, or silk, or you can’t put armor on a wizard. You can’t make your wizard throw fire balls at a fire creature, it will absorb the fire and won’t do any harm, you have to throw ice at him. I literally have to go by the book. 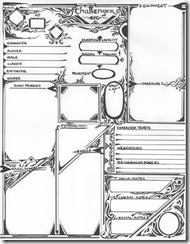 The character sheet you see is for a game called Challenger RPG. I downloaded 2 ebooks for that free game last night, so I will read those books and see if it will teach me to play that game. If that game doesn’t work for me then I will try the Dungeons & Dragons. I have many D&D books that I will need to read to create my characters from. And no, this is not going to be a Dungeons & Dragons story, but I can use that game to create my characters and to teach me what I need to know. I printed 12 of these character sheets to put in the notebook so I can make notes on each of my characters. I am sure I will make some mistakes, which is why I printed so many. I will print more as needed.

I played EverQuest from 2002 to around 2008 or 2009. I have played a wizard, shaman, warrior, enchanter, necromancer, druid and shadow knight. I have played a gnome, vah shir, barbarian, half-elf, human, high elf, drakkin and halfling. I don’t know what I am doing with many of the classes and races though. Just because I have played the game for nearly a decade, doesn’t mean I know what I’m doing. And it has been many years since I’ve played, so I am a little rusty, so that’s why I have the character sheets and why I plan on using another RPG game to create my characters.

I also intend on using the RPG games to create my fighting scenes. I’m not going to use it to create my plot or my story or dialog, I just need a little help with the battles. I do have a good imagination, but it’s not that good.

You can see a Trapper Keeper in the image at the top, but unfortunately I do not own one. If they sold them in the store then I would buy one, but I haven’t seen them so far. I still have lots of notebook paper from many years ago. I kept a notebook for my crochet patterns, so I have some school supplies. I don’t need to buy new notebook paper because my printer can print that out for me, it can also print graph paper which I also intend on printing so I can draw my maps, houses, cities, castles etc. I will need those to help me decide where my characters are going so it doesn’t seem like I’m going just anywhere in the world.

I never knew how much work went into writing a book. This project has opened my eyes to everything that a writer must go through when they are creating a fictional world like I am. Never take for granted what other people go through so you can have even a tiny bit of entertainment.