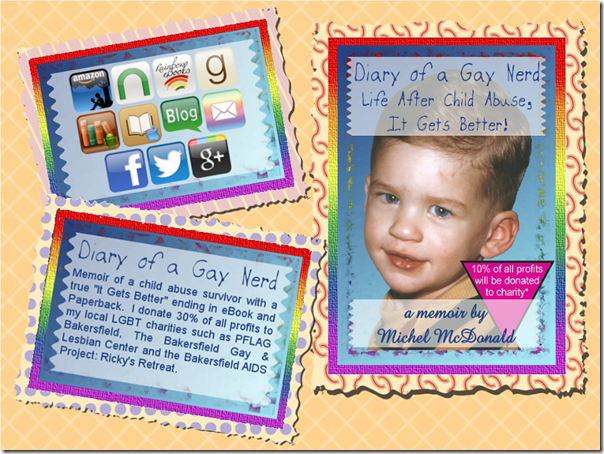 The first page of a website is the first thing that people see, and first impressions are everything.  After all, we all judge a book by its cover, and this page is for my book Diary of a Gay Nerd, so I have to make sure the front page is pleasant to look at.

I liked my other image, but it has been on the website for over a year and I thought it was time for a change.  So here is the new image with icons.  I thought about adding some more pages like my other website, but I honestly don’t know what to add that isn’t already on the blog, so I think I will just keep it the way it is for now.

I would like to blog more, but I spend way too much time on Facebook which is where most of my audience is, so I don’t really know what to blog about that isn’t already on Facebook.  I don’t know if it’s writers block, or if I have just said all that needed to be said with the book.

I didn’t make the frame, I got that from an app on my phone called Picsart.  I did however create the images inside the frames as well as created all new icons so they all matched.  I hope it’s nice to look at.

Please buy the paperback at Amazon as well as the ebook for the Kindle, the ebook for the Nook and help support LGBT businesses by buying the ebook at Rainbow eBooks (the .mobi file works for the Kindle and the .epub file works for the Nook as well as iBooks for the iPhone/iPod/iPad and Aldiko for the Android) and they always have sales.  Make sure to add it to Goodreads and please give me a review and rate my book.  I really appreciate that.  Also make sure you visit me on Facebook and say hey on Twitter too.

I donate 30% of all profits to 3 charities (they each get 10%) which are PFLAG Bakersfield, The Bakersfield Gay & Lesbian Center as well as the Bakersfield AIDS Project: Ricky’s Retreat.

I really appreciate all the support I have received since I published my book and I thank you all for reading and listening. 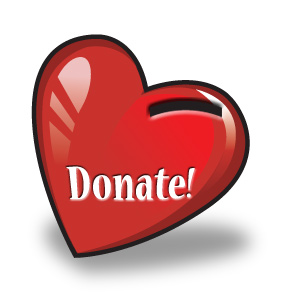 I have been waiting for the Amazon check to arrive to be able to write out checks to the organizations that I will be donating 30% (10% each) of books sales to, and it finally came. I’m sure most people would wait a whole year, but I’ve been chomping at the bit to give the money because it would make me feel good to help out where I can.

October the 4th 2012 is the monthly PFLAG Bakersfield meeting, and Audrey Chavez who runs Ricky’s Retreat, the Bakersfield AIDS Project is going to be one of the guest speakers, the other is Robert Petersen who is PFLAG Bakersfield’s Vice President, so I will take that opportunity to give them each my first donation.  I will have to mail the check to the Gay and Lesbian Center of Bakersfield.

Book sales haven’t been as great as it was in the beginning when I first published it, so I’m not sure when I will be able to make another donation.  I really feel bad about that, but I have basically no advertising money; it’s all word of mouth.  I’m sure if I will ever be able to make another donation from book sales, it will probably be next year in October as well.  I hope they will be bigger checks than these are. 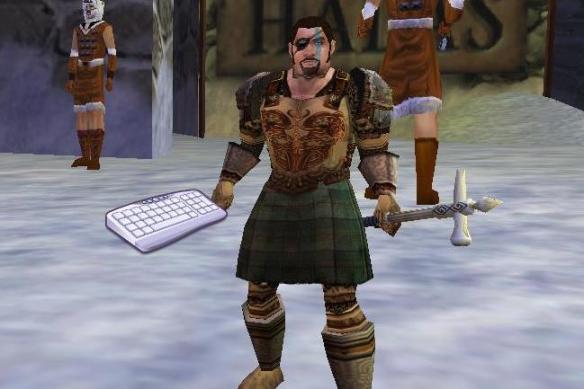 When I published my book at the beginning of February, I told the vice president of the Bakersfield chapter of PFLAG that I was going to be donating some of the profits to their organization.  I was asked if I wanted to promote the book by speaking at a PFLAG meeting and I was hesitant because I am barely good with one person, but a whole room full of people?  I wanted to do it, but at the same time I knew that I would end up forgetting everything I wanted to say and my whole body would begin to shake.

Last night was the night that I was supposed to do it.  Before I got up there I had already started sweating, particularly on the top of my bald head.  When I did go up, my whole body started to shake and I basically blacked out.  All of the blood in my whole body rushed up to my head and my vision became dark so I could barely see anyone.  I was looking at people in the front two rows trying to see, but I was having difficulty.

I wrote a little 30 second script that I had memorized, and as soon as I got up there I forgot everything that I was going to say so I had to make it up as I went.  That can be very dangerous because when I make things up as I go, I’m not thinking about what I’m saying, the words just get blurted out without any editing so anything could come out.  I have nervous tourettes so I was lucky I didn’t start shouting obscenities.

I am a keyboard warrior.  I spend 16 hours a day looking at Twitter, Facebook and Google+ searching and reading articles about LGBT and equal rights issues, transgendered issues, It Gets Better stories and videos and signing petitions.  I want to learn about what the politicians are doing and why they are doing it, but mainly I want to make other people aware of the issues which is why I post a lot of things on my Facebook wall, Twitter not so much but I’m working on it.

I think the reason I am so shy is because I have been wronged in public by so many people, that I have just crawled into my own dark hole and refuse to exist in the world with humanity.  I don’t want to be this way, but that is my reality.  I would like to leave the house more often which is why I started getting involved with the gay community here in Bakersfield, because I want to get out there and do something positive.

One of the things I would like to do is get down to the Gay and Lesbian center and just sit at a table and play games with people.  I think that will get me out of the house and it will put me in front of actual human beings and not a screen.  Maybe I can build from there and work my way back to a crowd of people I know instead of strangers.  Perhaps that will help me build better social skills.

Here are some embarrassing pictures of me at the PFLAG meeting that Chip took on his iPhone 4S (yes I had to include that he has Siri lol).  I knew I was big, but I didn’t know to what extent.  I need to either start wearing prints, plaid in particular, or go on a crash diet, well, I am supposed to be doing that anyway to lose weight, maybe these pictures will be my motivation.

Believe it or not, I have BDD which is Body Dysmorphic Disorder, although I’d like to take the disorder out and call it Body Dysmorphia.  Even though I have BD(D) and I hate the way I look and I would never post pictures of myself like this any other time, I have come to realize that when people see me at the grocery store, they see me as I am, so posting a horrible picture here doesn’t make any difference than those people looking at me standing in front of them.  It’s basically the same thing, right?  So there are the pictures.  They are small BECAUSE of my BD LOL.

I was told last night that I needed to come out of my shell, I want to so I am working on it. 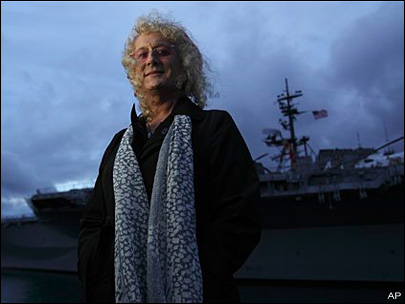 Last night I attended the monthly Bakersfield PFLAG meeting where their special guest was Autumn Sandeen.  If anyone doesn’t know who she is, she handcuffed herself to the White House fence to protest the Don’t Ask Don’t Tell policy and was arrested for it along with a few other people including Lt. Daniel Choi.

Autumn Sandeen is a very wise and very intelligent woman.  When the Pflag meeting was over, Chip and I got to go talk with her for a few minutes.  I have learned so many things about people in the transgendered community over the years and I have come to gain a great respect for anyone who knows what their gender should be and takes the proper actions to change it for themselves.  She isn’t having an identity crisis because she knows what her identity is and that is of a human being who should have been born in a different body.  Plain and simple.

Autumn is a person who deserves my respect and has it.  She is more of an activist than I could ever hope to be because she actually goes out there and does what she says she will do.  She is doing what I wish I had the courage to do and that is what makes her a hero to me.  She is standing her ground and going to jail for her beliefs and sometimes if that is what it takes to make change happen, then that is what she must do.

I am very lucky to have had the opportunity to meet her and I look forward to the world changing because of her bravery and determination.

PFLAG has their meetings once a month and I was asked to drop by for their March 2012 meeting to hand out business cards and to let people know where they can buy my book “Diary of a Gay Nerd: Life After Child Abuse, It Gets Better.”  It will be a powerful meeting because they also have Autumn Sandeem.  Here is a quote from the PFLAG invitation that I was sent: 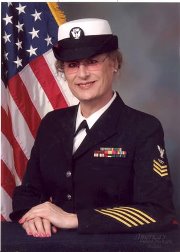 “PFLAG Bakersfield is excited to welcome Autumn Sandeen to our March 1st meeting. Autumn is a Transgender Navy Veteran, progressive blogger, writer and LGBT activist. She tends to focus on equality, diversity, veterans, LGBT, and most specifically transgender issues.

“Autumn’s tireless work for the repeal of Don’t Ask Don’t Tell brought her national attention when she handcuffed herself to the White House fence with other LGBT activists.”