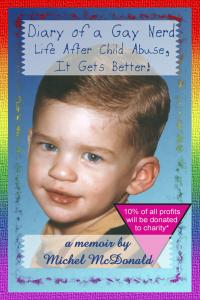 Hey did you know that my e-book is available on the Rainbow eBooks website?  It is available for $6.99 and it works on all e-book devices, even smart phones.  If you enter the code “GAYNERD” you will get 30% off the price of the e-book.  I think that is a pretty good deal.

Here is the description of my book:

“Being born gay isn’t easy for anyone, but being born gay in a homophobic family in the 1970’s made it more difficult for Michel. Physically and mentally abused by his family and school bullies, he had to learn to grow a thick skin to keep from going crazy. The constant torment from everyone around him drove him to several failed suicide attempts.

“Abandoned by his family, Michel was homeless at the age of 15, left to fend for himself in a trailer park in a new city. Taken back by his family after 6 months despite a very public suicide attempt, only to be thrown out of the house a year later when he was pushed out of the closet by his mother.

“Molested, raped, beat up and tossed aside, Michel felt like life was only going to get worse. Addicted to drugs and alcohol, he cried out for help, but nobody would listen, that was until he finally met his soul mate. He no longer sought self-destruction because he knew life was going to start getting better, and it did.”

Don’t forget that 10% of all profits will go to charity so please buy it today.  Happy reading!